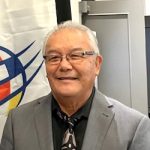 Larry was born on Jan. 24th, 1950, in Tla'amin Traditional Territory, B.C. Larry is currently serving his 3rd term in Government after first being elected for Council in 1971, then again in 2015, being part of the transition into Self-Governance in 2016 where Larry served on Executive Council, before being re-elected to the legislature in 2020.

Larry attended the Indian day school here in Sliammon then moved to Assumption Catholic School after the dissolution of the Day School, before going on to Brooks  Junior Secondary temporarily before going on to a Boarding Home program in North Vancouver BC for grades  8-12 where he graduated.

Larry is also an exceptional athelete, who has excelled in the sport of soccer. As a young child he began playing soccer in the community and eventually played top-level soccer with North Shore United in the Pacific Coast League from 1968 to 1971, where he was scouted by the Vancouver Cougars and the Vancouver Spartans. Larry played on the semi-professional Spartans for two years, playing for crowds at Empire Stadium and Swangard Stadium. In 2022, he was inducted into the Powell River Sports Hall of Fame and in the same year, he was also inducted into the Soccer Hall of Fame of BC.